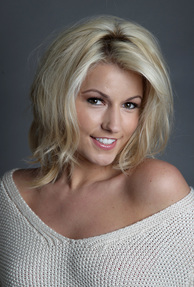 Hailed "a joy to behold” by Eamonn Holmes; "An exceptionally talented singer" by Hello! Magazine and labelled a “World Class Soprano” by the Mail On Sunday’s EVENT Magazine, Natalie is often referred to by her fans as "The Voice of Wembley" for her 6 performances at the Stadium. She has built an impressive following for herself in recent years following her national tour with classical group BLAKE, live performances at Wembley Stadium & Chelsea Flower Show and for charities including the British Heart Foundation, WellChild,  Cystic Fibrosis and more.  Known for her stunning classically-trained voice, last Summer Natalie debuted a new musical direction when she performed a series of sold-out concerts at Live at Zédel with a set that paid tribute to the great divas of Broadway and the West-End from Doris Day to Ella Fitzgerald and Judy Garland.  This success was swiftly followed by an astonishing performance of The Long & Winding Road accompanied by a 76-piece orchestra at the world famous London Coliseum which the 2300 strong audience rewarded with a standing ovation.  Most recently, Natalie wowed the 2500 guests at St Paul’s Cathedral with a solo performance of O Holy Night for the Breast Cancer Care Carol Service and hosted her own sold-out Christmas concert which featured founding BLAKE member Stephen Bowman as her special guest. Natalie counts members of the Royal Family among her many fans and she works closely with the Duke of Edinburgh’s Award Scheme - regularly appearing at Buckingham Palace, St James Palace and Holyrood Palace with HRH Prince Phillip to make speeches and present the Gold awards.

Natalie made her Wembley Stadium debut in 2013 when she was invited to sing the National Anthem for the Football League Johnstone’s Paint Trophy Final.  A second & third invitation swiftly followed from the nPower Championship Play-Off Final and the Rugby League Tetley’s Challenge Cup Finalwhere Natalie also sang ‘Abide with Me’.  Her dulcet tones were so in-demand that in March 2014 Natalie returned to Wembley Stadium to perform the National Anthem once again and in November that year was called upon to support England and performed both National Anthems for the Rugby League World Cup England v Fiji match at Hull’s KC Stadium.

More high-profile performances followed at events for Attitude Magazine, Marie Curie’s ‘Carols in the City’ at Southwark Cathedral, Guildford Cathedral and in Duke of York Square for the Princes Trust. For the launch of the British Heart Foundation’s inaugural Roll Out The Red ball, Natalie was booked for a headline performance while The Saturdays star Mollie King hosted.

In her teens and early twenties, Natalie worked closely with The Order of Malta Volunteers and to this day charity work is held close to her heart.  When the NHS’ biggest charity Breathe Arts Health Research asked her to be their Patron Natalie was honoured to accept and regularly performs for staff and patients in London.   She has also made performances to support The Children’s Trust, WellChild, Cystic Fibrosis Trust, Variety and the Queen Elizabeth’s Foundation for Disabled People.

In April 2016, Natalie celebrated The Queen’s 90th Birthday at Royal Hospital Chelsea giving a concert for the Chelsea Pensioners. In the summer following this, it was with great pride that Natalie joined HRH The Duke of Edinburgh at Buckingham Palace to celebrate the 60th anniversary of the Duke of Edinburgh’s Award.  She was subsequently invited for her third time to St James’s Palace to give an inspirational speech and present young recipients of the Duke of Edinburgh’s Award Scheme Gold Award with their prize.  She continues to support their work and as a Gold Award recipient herself, understands the challenge better than most!

In recent years Natalie has become synonymous with the RHS Chelsea Flower Show where she has performed for 4 consecutive years, entertaining packed audiences of up to 2,000 from the Bandstand.